TWBUG has been campaigning for a number of years for more high quality cycling infrastructure in Tunbridge Wells. We are not so much campaigning for existing cyclists but for the 60% of the population[1] who would like to make more short journeys by bike rather than by car but who will not share the road with heavy, fast-moving motor traffic in order to do so. Our recommendations are based on ensuring that the designs are safe and attractive for those who presently do NOT cycle on the A26.

Our research over the last 4 years has confirmed that traffic congestion cannot be solved by building or widening roads but only by offering alternative means of transport. In particular, we can only accommodate population growth by transitioning some local journeys to more space-efficient modes and the bicycle can dramatically increase journey capacity. 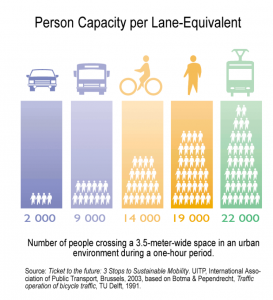 We are very pleased that KCC is taking action to improve cycling provision along the A26 and is investing time and money in drawing up plans. This is good news as it represents a sea-change in local transport policy towards a realisable and affordable solution to congestion, pollution and our sedentary society.

Purpose of the A26 cycle route

The stated aim of the improvements to the cycle route is to:

‘…encourage more cycling along the route which would contribute toward congestion relief, improvements in air quality and health’

We agree with that aim and we acknowledge that the current proposals will improve conditions for existing cyclists and attract some new cyclists.  We would go further and recommend a number of changes which will:

‘To make cycling a normal part of everyday life in the borough, by creating a safe and welcoming environment for cyclists of all ages and abilities’.

We believe that our additional proposals will make a larger contribution to reducing congestion and improving air quality.

Experience from London, Cambridge, Leicester, Bristol, Bath, Brighton and many other UK towns cities is that physical segregation from motor traffic is needed to make potential, but nervous cyclists feel safe enough to use them.

Proposal 1: We recommend putting the cycle path on a separate kerb-protected track or raising it to the level of the pavement.

The evidence is that for a route to be used extensively, it needs to be continuous.  There are parts of the route that are acknowledged as less than ideal, particularly between Southborough Common and the A21.

Proposal 2: If it proves too difficult and costly in the short term to build the whole of the route from Tunbridge Wells to Tonbridge, we suggest that the route should be designed to the highest standards and then built in sections as and when resources allow.

In practice, this means (a) largely accepting the current proposal for the route north of Southborough Common and (b) implementing a higher standard from Grosvenor Road roundabout to Speldhurst Road. This is the part of the route where the existing road is widest and should attract the highest numbers of people cycling.

Proposal 3: increase the number of side junctions with raised tables and tighter entrances to include most, if not all, side junctions.

A 20 mph zone is being implemented to the east of St John’s road in order to improve life for residents and to increase safety in those residential streets. In many towns and cities, such zones are being reinforced by allowing pedestrians and cyclists to move freely in and out of the zone, but restricting motor traffic, by closing specific streets to through traffic.

Proposal 4: Take the joint opportunities of 20mph in St John’s and an improved cycle route to restrict motor access to a number of side roads along St John’s Road.

Building the section from the Velo House to Majestic Wines to an excellent standard[2] will lead to a ‘virtuous circle’. Like the fully segregated sections of London cycle superhighways, it will be used by much higher volumes of bike riders who will then say ‘This actually works – let’s build the rest of it’. Success attracts funding – and so will start the first element in our overall project: transforming Tunbridge Wells into a town that is nicer and healthier to live in and that works for all of us.

With your support we can do it. To ensure your views are listened to please do not delay, but respond as soon as possible to the consultation.

[2] The UK has three high quality design guides for cycling that TWBUG believe ought to be used for this route. Please feel free to visit these links to see what we should be aiming for: